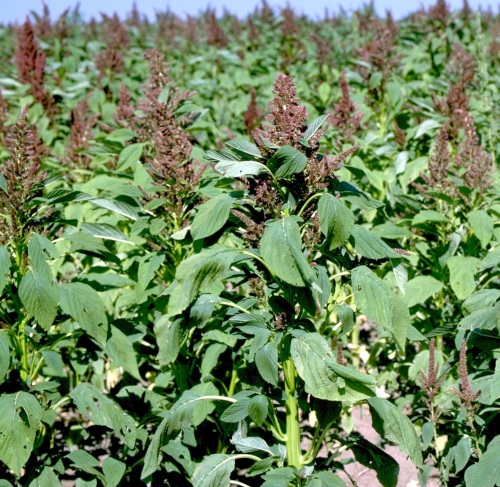 As some of you may know, I am starting the Ann Arbor Sugar Beet Project. The idea is to create a local source of non-gmo beet sugar for Washtenaw County. The purpose for a gmo crops is to be resistant to herbicides, the most popular being roundup by monsanto. These crops are often referred as roundup ready. So with a gmo food you are getting a sprayed non-organic plant. If that is not enough, there has been a concerned that air pollinate crops like gmo beets can transfer their roundup ready traits to not only organic beets making them worthless to the organic consumer, but to also weeds. This in effect would create a super weed that is resistant to roundup. A farmer can spray all the round up they can, but the super weed will still be there.

This logical fear has become a reality I am afraid. May I introduce the Giant Pigweed, our super weed. The video piece (Pigweed Story by ABC NEWS) shows this prolific crazy weed that is so strong that it can break heavy farm equipment. Monsanto, the company who created roundup throws the blame on the farmers saying they used too much roundup, which created the situation where the weed developed. Further comments from a company spokes person said that a fix would not be ready for seven years. Their argument makes little sense. The plant took on the resistant traits period, and then spread it to their friends.

Entire fields are being abandoned where the weed is out of control, and heavy equipment is useless.

In a 2009 article by France 24: “Palmer pigweed is the one pest you don’t want, it is so dominating,” says Culpepper. Pigweed can produce 10,000 seeds at a time, is drought-resistant, and has very diverse genetics. It can grow to three metres high and easily smother young cotton plants.

According to the article 100, 000 acres in Georgia has been infestation with pigweed. 10,000 acres of production farm land were abandoned without harvesting.

The only solution to this problem is hand weeding. Yes good old fashion handing weeding, and hand harvesting because machines can’t get into the fields. So much for the big ag advances in farming. This weeds stem is as thick as a baseball bat, and can lock up combines.

But this is down south right? We are safe in Michigan, right?  Wrong. There is pigweed in my backyard in Ann Arbor. I cannot say it is a roundup ready super weed, but since I do not use herbicide it does not matter. It is just another weed to pull. Perhaps our hard frosts may delay the migration of the super weed strain, but that seems like only a matter of time.

Back to beets, most of the sugar beets grown to make Michigan beet sugar use gmo-roundup ready seed, and the accompanying roundup herbicide. The question is if this practice will/has already created a Michigan comparable super weed. Let hope not, but is there a back up plan if one develops? Are we ready to go organic, and hand weed? Has big ag bet all of their chips on roundup and gmo seed only to show us their cards to a losing hand? It certainly would appear so.

After all, why buy roundup when you have to still go back in and hand weed, and hand harvest? Remember it will be a seven year wait until they figure it out, and by then maybe another super weed will show up to create a maddening endless cycle.