A few weeks ago, I had posted the unfortunate news about how my sugar beets went moldy. I throw them in my compost pile and figured I would have to get around to mixing them in or covering them.

Well I went out to the pile and found them all gone. Look at the before and after photo. We are talking about 350 Lbs of beets. 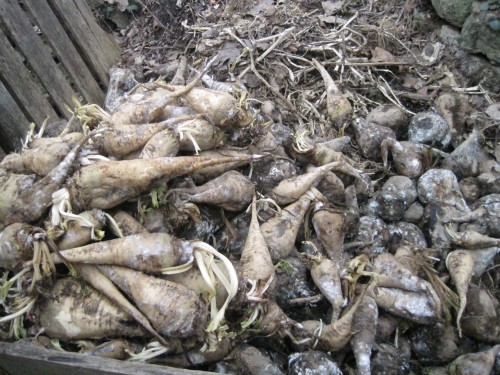 There were deer prints around the pile and I assume they had a good feast of the beets.

Last year, I grew my beets at the MBG community garden which has a 10 foot high metal fence around it to keep out the deer. This year, I will be at the county farm park garden which does not have a fence.

OK. After growing, harvesting and trying to figure out how to make sugar from sugar beets without having much of a clue, we finally managed to make something sweet.

Check out the video to see what we did.

The result was a earthy, molasses syrup that turned part crystalized and sandy when it cooled. It has a strong flavor and I figure it would be good in some bean dishes and for a molasses kick with sweet quick breads.

Another interesting discovery was sugar water. And I am really excited about the potential.

The process of making beet sugar from sugar beets entails a long cooking time like maple syrup to get to the crystal stage, but I found that it only requires a minimal amount of cooking to create sweet water.

It tastes just like sugar and water and I figured that if someone wanted to make a batch of sweet beverage, they could do it with a lot less fuel use from making crystal sugar and then adding back the water.

For example one could make sweet iced tea with the hot sugar water from and early stage in this process.

Sugar water can be a possible economically viable use of this with small cottage food beverage businesses being about to create a locally produced home grown sugar micro beverage industry.

Here is a picture of one of my sugar beets. Actually it is the best one of the bunch. Most are smaller than I would have liked because I got them in late this year, but I still think I will have some beets to make into sugar this year. An Omish farmer at the Westside said that he was growing sugar beets too, so the plan is to buy a sack off of him to use to test the process just in cast our sugar beet harvest craps out. This is really a tester year for next year when I hope to have a quarter acre in production.

I am still looking for a location to host the event, but it will be in the Ann Arbor area. I will post the actually location on my event section of this blog. Plan on having your beets harvested, wash and ready to make into sugar. If you have a large heavy bottom pot (not a canning pot), bring it.

Please email me with any questions. 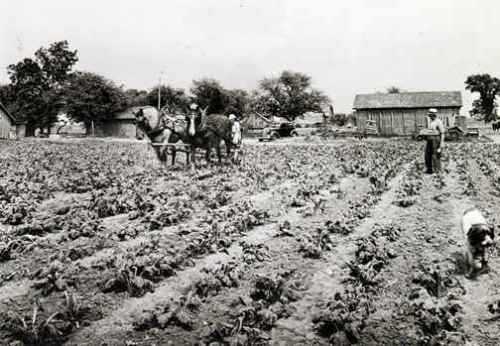 Picture of sugar beet farmer in michigan from 1939

A previous post talked about how most of the sugar beets grown in Michigan come from GMO sugar beets. I am not a big fan of GMO foods and thought it unfortunate that the access to non-GMO white beet sugar, a proud Michigan staple, is not available. Being a local food guy, I thought that there has to be a way to get my hands on beet sugar or make it myself.

Then I found this video on how to make sugar from sugar beets.

The process is a little involved, but I think it is doable and not much more involved then canning tomatoes or making jam. Maybe along with canning, pickling and jam making, a grass root movement can be started to bring back home beet sugar making.

Most home gardens in Michigan used to include a spot to grow sugar beets for sugar. I do not use much white sugar. I used about one five pound bag of big chief this year for a family of four, along with Michigan maple syrup and honey. Looking at the demo, I figure that a single beet could provide a few ounces of white sugar, and even more left over molasses sugar. I estimate that a small patch of a few dozen sugar beets could produce enough sugar for the year, about a pound of white sugar per a half to a dozen beets. I admit that I am getting ahead of myself having neither grown sugar beets or made white sugar from them, but I am up to the challenge. Maybe by this time next year, I will be planning my Thanksgiving desserts that includes my organically home grown, and made white beet sugar.

This fight is directed toward Genetically Modified Organisms (GMO) sugar beets, and it can have a huge impact on Michigan’s sugar beet industry because most of the states sugar beet crop comes from GMO seed.

Genetically engineered soy beans, and corn are also a concerns for organic farmers.

Zelig Golden, a lawyer with the Center for Food Safety, is moving the court to issue a permanent injunction to halt the sale and planting of GE sugar-beet seeds now and into the future, until the USDA does its job to protect consumers and farmers alike. This can take years to resolve.

The parties meet in court next month. In a similar case, a judge banned Roundup Ready alfalfa; Monsanto’s appealing that decision to the Supreme Court. If there’s a ban on sugar-beet planting nationwide, it’s doubtful there’s enough conventional seed in storage to lay in a crop next spring.

Thinking locally with food and living in Michigan, I was excited to have access to a ready supply of white beet sugar. This meant that I could still have my local cake and eat it too.

Unfortunately there was more to my local cake story. The GMO sugar beets was the elephant in the room I was willfully ignoring in order to justify my 5LB bag of Big Chief brand white sugar. I do not knowingly support and buy GMO foods, so my bag of local white sugar will have to go. I did a half hearted search for organic michigan sugar, but have yet to find any probably because it does not exist.

What is wrong with GMO foods? For one, the whole point of a GMO plant like sugar beets is to allow them to resist the effects of an herbicide. So you are buying food that is sprayed, and not organic. For two, the question of GMO food safety and environmental impact is still not out.

And if a GMO trait can spread to other plants like beets, who is to stay it will not spread to the same or other weeds that they are trying to prevent? We can be creating herbicide resistant super weeds making this whole study a complete waste of effort, and worse than before.

It is unfortunate that sugar beets farmers in Michigan may take a hit if planting comes to a halt because of the lawsuit. But why was a conclusive environmental impact study not done before farmers were allow to grow GMO sugar beets, and why was there no back up plan from the states agriculture extension services to stock pile seed in case these GMO plants were found unsafe? And what is the back up plan for corn and soy for that matter?

The fact that most sugar beets come from GMO seeds that have been modified to resist herbicides. This means that my bag of michigan sugar most likely comes from GMO seeds/plants. There is no way of knowing this for sure because there is currently no labeling laws for GMO produced foods. This is because the GMO industry fought against it, out of a rightful fear that consumers would avoid GMO labeled products. I, for one would like to know if the food that I am eating came from GMO ingredients.

The other end of this is that GMO sugar beets can potential pass traits on to the beets and chard in my home garden. If that happens will a company come after me or my fellow community gardeners with a patent infringement lawsuit? It seems naive to think that they can’t or won’t. Just because we home gardeners are not big farmers or may not live in a big agriculture economically dominated community does not mean that we are safe.