Outrageous fast food has become a food trend. I think we can thank the KFC Double Down, a food menu item so bizarre that makes you wonder what they were thinking. But this franken sandwich of sorts was popular, and received plenty of free media attention, which I am sure the fast food companies liked. So I think these crazy concoctions are here to stay.

Customers have also taken the lead to create their own outrageous food items based on the offers of fast food. These off menu/re-engineered fast foods are featured in this post.

With the popularity of food shows like Man vs Food, a show dedicated to watching a guy pig out, and perhaps an increased popularity in cheap fast food due to the recession, outrageous fast food might be a growing trend.

I can’t say that I have had any of these sandwiches. To be honest, some of this sandwich/food fast concoction scare me. But they do represent current food culture, so I feature them on this blog.

This is the burger that stated it all. I found this variation on the web site ChocolateSuze.com. Hers feature a fried egg and a slice of pine apple. I have seen two doughnuts used a for the top and bottom bun.

Of course, we Michiganers from the land of the paczki could out match a Krispy Creme Doughnut. I have been trying to think of a Michigan paczki version of this to no avail.
Cheesy Blasters

This was a made up food from the show 30 Rock: You take a “Hotdog, cover it in jack cheese, wrap it in a slice of pizza, top it with nacho cheese.” A cartoon cat called Meat Cat is the spokes “person” for the cheesy blaster on the show.

Duff Goldman from Ace of Cakes made these for the crew on 30 rock for a party. I have not heard of them being served at a restaurant, but it is only a matter of time.

The Luther KFC Double Down 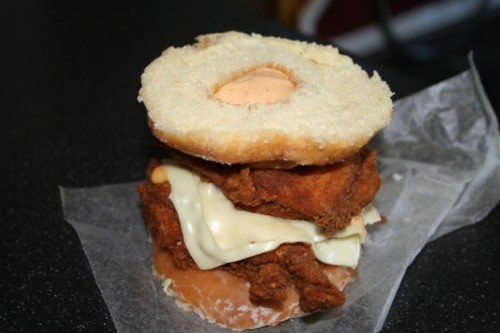 Luther Vandross invented the now famous Luther burger which consists of placing a hamburger between two Krispy Creme doughnuts. Now someone has taken that theme to one up the KFC Double Down. 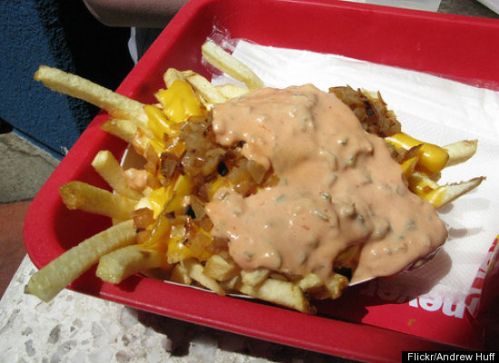 French fries with secret sauce, onions and cheese on top. People say they love it, but it looks so unappetizing.

This is a burger topped with mozzarella cheese, pepperoni, banana peppers, marinara sauce and tomatoes. I hear Red Robin is open to sandwich requests for off menu creations more than other fast food places.

Are there more of these concoctions?

Please comment on your own fast food variation sandwich.